Guitaresque is a Singapore-based non-professional classical guitar quartet. All our members are full-time working professionals but have come together because of our shared passion for guitar music.

We are alumni members of the NUS Guitar Ensemble (GENUS), the premier Niibori-styled guitar orchestra in Singapore, founded by Mr Alex Abisheganaden.

Recently, I visited the Yamaha music school at Clementi, to sign up for a junior music course (JMC) for my son.  As someone who has benefited from the rich and rewarding experience of not just listening to, but actually playing (and performing) music through an instrument, I really want my boy to also enjoy this wonderful journey as he grows up.

Of course, I'd personally asked he many times before actually putting down the cash to sign up for the course.  Each time, he'd give me the same answer (in Mandarin), "Yes, I want to learn the piano!".  My wife and I obviously know that the words from a not-yet-four years old kid has to be taken with a serious pinch of salt.  Yet, the fact that he'd repeatedly proclaimed his interest in learning the piano, and not the guitar (I'd only given him that 2 choices, to keep things simple..); coupled with our observation that he loves singing and appears to be rather rhythmically-attuned, led me to this decision.

I recall myself learning the piano from a young age also.  My mum did, at that time, what I am now doing for Jing Kai - she sent both me and my elder brother to a piano teacher.

Unfortunately (for both of us, I think), we didn't really liked that teacher - her methods were dull and she didn't exactly inspire us, or even bothered to motivate us to play the piano.  I remembered our 1 hour lesson each week consisted nothing but scales, and exam pieces!  Try convincing a primary school kid to love playing Clementi (not the station west of Dover MRT lah! ) and Bach... Tough.
It didn't help that we were forced to go through the ABRSM graded exams, even as we dreaded going for each week's piano lesson and having to practice the exam repertoire at home.

Against all the odds, we'd still managed to complete our Grade 7 exams before finally calling it a day. Enough was enough.   By then, I was in Sec 1, and had fallen in love with a new instrument - the classical guitar.  This love affair has since lasted till today and the feeling is stronger than ever.

I am grateful for my piano background though.  The music theory foundation was instrumental in helping me pick up a new instrument and learning it faster than I would've.  And this is what I wish for my boy.  I will not force him to take music exams if he does not enjoy playing the piano, but I will certainly encourage him to persue his interest music - if he indeed does show keen appreciation for it.

One day, hopefully he will embrace music as his father does, expressing himself through the music instrument of his choice.

No prizes for guessing what I hope that instrument will turn out to be.... :P

Recently, I'd put a deposit for a new guitar to be built for me - by renowned German luthier Fritz Ober. 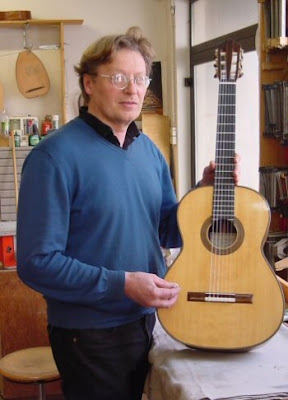 Like Robert Ruck (from whom I'd placed an order some 10 years ago now), whom I had not met, nor even played a single guitar made by him before placing the order, I am placing my faith on reviews put up by other players/collectors/etc. and a little "instinct".

Some of these luthiers have built up such a reputation that their waiting list is prohibitorily long or even closed. I heard Dominique Field's waiting list is 17 years and counting.. (geez!). Furthermore, some of their prices are near stratospheric or near-impossible levels. For instance, I saw a second hand Field being sold for USD25,000, not sure how much a new one would cost (invariably, these are tagged as "Inquire", so I can only assume it's in the 30-35k region if not more). Dammanns and Smallman also go for these kinds of prices. Not to mention Frederich's... those are like untouchable, at least for me.

I'm crazy about guitars, but not THAT crazy.

Then, because I have a US luthier-made guitar, I kind of want to try one made by another region (possibly using differnet kinds of woods/materials). The Spanish guitars are tempting, but many of these are no longer made solely by the master luthier himself - think Ramirez, Bernabe, Contreras. These brands have made such a name for themselves that unless you go for the Top-of-the-line model, I doubt the guitar even passes through the hands of the man himself! More than likely, the guitars will be made by a senior apprentice in their workshop, at most under close supervision by the master, to maintain certain levels of workmanship. I just don't fancy that.

Back to Fritz Ober's guitars. He has been building up a reputation for making more than decent replicas of Hausers and historical instruments. At the same time, he has made importants strides in experimenting with low body resonance, giving the guitar a supposedly warmer bass, without sacrificing volume and projection. Of course, being a sucker for looks, I am also attracted by the beautiful spruce tops and Brazilian rosewood sides of Ober guitars from pictures I've seen on the web. They are truly stunningly beautiful instruments.

The other factor being - I have a little more faith in German-made stuff, these folks are just so well-known for their precision and consistency in producing some of the world's best consumer goods.

You can only read so much into reviews and opinions of others. At the end of the day, the choice of a classical guitar is a personal thing. Everybody has their own "taste" when it comes to sound quality and playability. Furthermore, a guitar may sound godlike in one's hands, but pretty ordinary in another's - something which I will never forget...

It's just another 1.5 years of wait, till I get my hands on my second (and probably last) handcrafted concert guitar. I am filled with anticipation and excitement (almost like waiting for the arrival of my baby daughter, who's due in Feb 2012! haha). 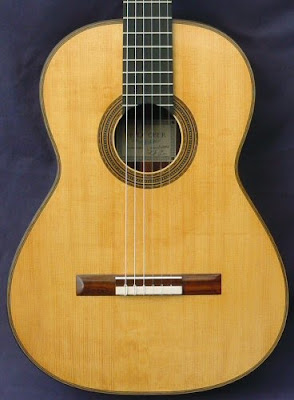 One of the pieces the quartet worked on today was Estampas (Torroba).This piece brings back memories...

I recall that many years ago (probably more than a decade!), I did a recording of some songs in this selection with a quartet that comprised - Kwok Kar Mun, Karen Ann Leong, Ivan Goh and myself.

We were the "original" GENUS quartet to stick together beyond a Genus concert, as in those days, small groups were formed purely for the purpose of performing in annual Genus concerts. After the concert, the groups 'disbanded' and new groups were formed when upcoming performances came along.
(note: come to think of it, we STILL are the only small group doing this.... unless I include Xpose, which is not technically a "small group" :P)

We certainly broke that trend, as the four of us felt it was a waste if such a group of like-minded folks only rehearsed one (or two) songs each time. We were capable of doing so much more. So we stuck together and called ourselves... Guitaresque.

Of course, Kar Mun and Karen subsequently departed from the quartet to pursue other priorities in their lives, leaving just me and Ivan as the original members of that group. But we'd welcome new members - Kevin and later Alex. (Alex, who is our newest member, has joined the quartet for more than 5 years now..)

Anyway, playing Estampas again after all these years, I feel we are certainly more able to bring our sounds and expressions which were totally impossible then.

Instead of cherry-picking (we only did 4 pieces previously), we are now rehearsing the entire song, and I find myself enjoying the strong Spanish "feel" of the song!

Hopefully we can find a good occasion to perform this wonderful contribution from Torroba!
at 8:03 PM 1 comment:

It is tough getting a performing gig in this little red dot!

And I'm not even talking about a paid gig. We are prepared to play for free, but it seems that the performing art scene in Singapore is really limited when it comes to finding an organization/location willing to sponsor a venue for a locally-based group.

Anyone looking for a classical guitar quartet to perform in for any occassion? Open houses? Functions, ceremonies? Even.. graduation dinners and.. weddings??
at 7:41 PM 2 comments: 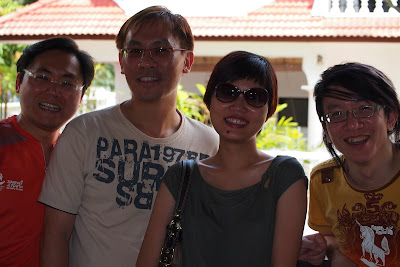 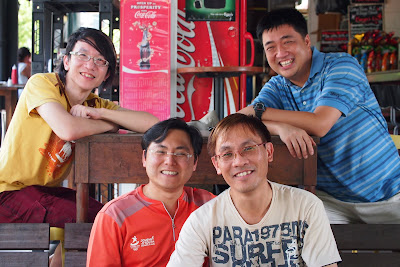 A little get together

On a lighter note, Guitaresque celebrated the DIVO's birthday recently at Saizeriya. We had a wonderfully long lunch, peppered with the essential gossips and exchange of deeply intellectual views on lifestyle, classical guitar and ...world politics. 希望年年有今日吧！ 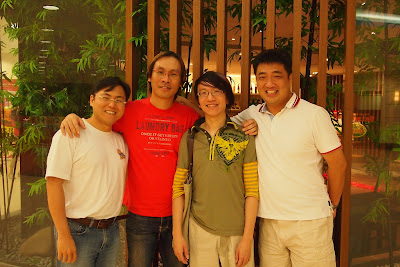 It's been a long time

Woah.. it's been almost a year since I've updated this blog (or my personal blog too!).

Not to worry, Guitaresque has not disbanded. In fact, we can still having our regular practices and jamming sessions at the Divo's home. It's only that I have been totally swarmed by work and other personal commitments and have little time to contribute articles or share my thoughts in this blog.

Still, I am hopeful this will change.. soon!

As a quick udpate:

- The quartet has been faithfully honing our sight-reading skills. We do this by purchasing and reading new scores every couple of weeks. One of the more interesting scores we recently did was "Tokyo Bay Highway" by Hirokazu Sato, one of our fav guitar composers/arrange of late.
This piece is not too difficult to play, but lots of fun! And of course, it sounds great too. We hope to perform this piece soon, maybe along with Andrew York's Pacific Coast Highway!

- Another piece we have been working on is "Baio de Gude", a composition by Paulo Bellinati. This has been in our "closet" for the past couple of years, and we'd all along felt it was too technically/rhythmically challenging for us to play well. But with the years going by (in a flash, I must say!), we seem to have improved our individual technique and understanding of one another's play, so when we took up this song to try again, it was surprisingly not that tough anymore! It would make a nice performance/competition piece, I think...

- We have also dug out the LAGQ's arrangement of the "Carmen Suite" to rework on - as seeing we did not do much justice to some of the more challenging movements in the past, namely Gypsy Dance and Toreadors. This time round, I must say the Gypsies and the Bull fighter are dancing a little more to tempo! Haha.

- Finally, another of LAGQ (York) work that Guitaresque has taken on as a challenge is "Quiccan". This was once an absolute 'out-of-bound' piece, and in many ways, it still represents one of the toughest piece the quartet has ever taken upon to rehearse. It is technically difficult and rhythmically complex as well (just as an example, there are bars of 12/16, 6/16. etc amidst the usual common times of 4/4... haven't seen those time signatures in any other scores, I must admit...See below:)

But once we get the hang of playing some of the parts, and hearing how it all gels together, the song becomes really catchy and intriguing to play! Not that we are anywhere NEAR performing it though... think that will take some work and lots of individual effort to practise!

Here's a clip of the marvelous LAGQ performing this lively song:

That's all for now... will try to keep this blog "alive" if I have time to update. 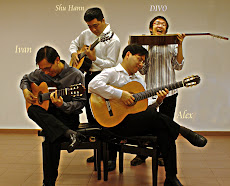 Guitaresque plays a mixture of commerically available scores as well as its own arrangements: